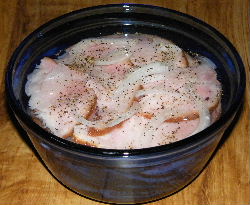 I've tried to discover the origins of this ham in vinegar recipe, but both of my grandparents have passed away, so I'm just not sure where it came from. I've checked with all of my older relatives and they all remember eating it as a kid, but no one knows who first came up with it. I did some research on this recipe, and the only thing I could find was a french dish of ham and vinegar, which is like a beef stew, but you replace the beef with ham and add balsamic vinegar to the mix. This is nothing like that because it's cold and doesn't have all the stew vegies. The only thing I have been able to surmise is that it started as a way to preserve the ham back when they didn't have refrigerators. I do know, however, that vinegar will kill mold and bacteria. Since this dish is made with raw, smoked ham, and my grandma used to let this dish sit out on the counter for days, while we ate out of it and never got sick, I'm guessing it has some pretty great medicinal properties.

In a glass or ceramic bowl, layer the ham and onions. When the bowl is full, fill it with vinegar and pepper the top. Let it marinade for at least an hour and enjoy with a slice of really good bread.

While this recipe may sound a little strange, it has done wonders for my digestion!