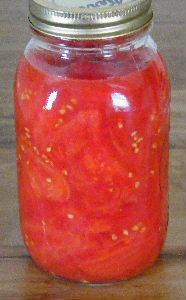 As you can tell by the number of recipes that link into my home canned tomatoes recipe, I use them a lot. Every year my family and I can anywhere from 2-6 bushel of tomatoes. When we're lazy and only do 2, we usually run out. We're just huge tomato fans--everyone except my daughter, of course. Most of us do eat the home canned tomatoes right out of the jar, and often have to open a second quart for the recipe we were planning on cooking. Unless you're a die hard tomato fan, you probably won't need this many jars of home canned tomatoes, but it is a good idea to do it in a single batch, just because of the time involved.

Here's what you need to make home canned tomatoes:

-Kettle for boiling water
-red, ripe, tomatoes (tomatoes must be as ripe as can be without spoiling. This ensures you get the best flavor).
-quart size canning jars
-canning salt
-a tray to place your tomatoes
-a canning jar tongs
-small wooden plunger or dowel
-butter knife
-paring knife
-quart jars
-canning lids and rings (if you are buying new jars, the lids and rings usually come with the jars; jars and rings can be reused but lids should be bought new every year. I do know people who reuse their lids, but their success rate for getting the jars to seal is not as good.
-1 pressure canner for quart jars
-an old bath towel

Preparing the tomatoes: Put a large kettle full of water on to boil. You will be using this water to scald the tomatoes so the skin comes off. Put the stopper in your kitchen sink and fill your sink full of tomatoes. Make sure the amount of tomatoes you put into the sink will be covered by the amount of water you are boiling. When the water is boiling hard, pour it onto the tomatoes.

Let the tomatoes stand for about 5-8 minutes or until you notice the skin starting to loosen. Put 1/2 teaspoon of salt into each of your quart jars. Take several tomatoes out of the water with your tongs (it is too hot to do by hand). Use a paring knife to peel the skin off the tomato and removing the stem and any bad spots. Fill your jars with the tomatoes, pushing them down as you go.

When the jar is full, use a small wooden plunger (ours came from the old fashioned sieve we use for making tomato juice but one year when we couldn't find it, my uncle cut 6 inch long pieces of a 2 inch wooden dowel and sanded them down. We sterilized them in the dishwasher and they worked great. I still have them.) to pack the tomatoes down into the jar. This helps you fit more in, and when the canning is done, you are more likely to have a full jar than only a half of a jar due to the cooking. After you have the jar full (about 3/4 of an inch from the top), run a butter knife down into the jar to get out any air bubbles. If you don't do this, your jars may not seal. With a wet paper towel, wipe the rim of each jar. You are checking for any minor nicks in the glass as well as cleaning the jar top so you get a good tight seal. If there is a nick in the jar, pour your tomatoes into a different quart jar and do not use the nicked jar for canning.

Place your lids and rings in a small kettle, with just enough water to cover them and bring them to a boil. This sterilizes them and helps to create a better seal. When they are boiling, put one lid and ring on each jar.

Put your jars into the pressure canner and fill with water to slightly higher than 1/2 the height of the jars. Put the cover on with the jiggler on 5 (5 pounds of pressure) and put it on the stove. Set the burner to high and when it starts to jiggle, turn the heat down between high and medium and time for 10 minutes.

When 10 minutes are up, turn off the burner and remove the jiggler. Wait until the steam is gone, then remove the cover. Take your home canned tomatoes out and place them on towels on your counter to cool. When they are completely cooled, you will need to check them to see if they sealed. Do this by pushing on the top of the lid. If it's solid, great! You have home canned tomatoes. If it pops, it isn't sealed. You can still use these unsealed tomatoes, but do so in a few days because, if left, they are not preserved and they will spoil rather quickly.

If you're wondering how many tomatoes produce an exact number of quarts, this is a guessing game. On average, we can about 5 bushel and get between 102-111 quarts (It takes 4 of us most of the day and part of the evening and we have two stoves going steady). Last year, there wasn't a good tomato crop so we only did 2 bushel and got 41 quarts. Through the years, I've surmised that the best time in Wisconsin to get this many tomatoes is right around the 3rd week in August, unless it's cold, then it's a waiting game to get the volume. It might be different where you're from, so it's best to keep checking with the growers. My grandparents would plant so many tomato plants every year, that many years my grandma would start home canning tomatoes in August and do at least one batch every week until the middle of October, depending on the weather. (this was in spite of all we ate fresh).