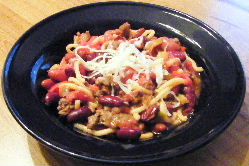 Mom's chili recipe is a little different than most chili recipes you are probably used to seeing. Most seasoned cooks, make chili by guess and by golly. In other words, they estimate the amount that goes into the pot. My family is no different, especially with a recipe we've made millions of times. In all of the recipes that I've cooked and posted thus far, I made sure I had proper measurements for you, but when my mom gave me this recipe, she wrote it out as she threw it in the pot, so a few items are measured by estimate. When I tried to pin her down, she got this vague look in her eye, and said, "but that's what I do". So with this recipe, you will be learning to cook by the 'guess and by golly' method. I'm sure you can handle it, I've detailed it as much as possible and when it comes to chili, it usually doesn't turn out the same way each time you make it, but tastes great anyway.

Fill a large pot with water and about 1/2 teaspoon salt, bring to a boil. When water is boiling, add spaghetti. Cook the spagetti for approximately 15 minutes and drain. Put the spaghetti in a large, microwave safe dish.

While the spaghetti is cooking, brown your hamburger in a large skillet until fully cooked. Remove the hamburger from the drippings and put it in your microwave safe dish.

In the hamburger drippings, saute the green pepper, celery and onions until the onions are clear. Add this mixture, along with the rest of the ingredients to your microwave safe dish. Put in the microwave for 1 hour.

The great part of this chili recipe is that it's quick, because you make it in the microwave. It's an easy dinner meal when you need to get something on the table fast.