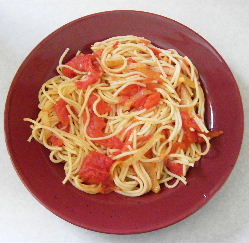 Spaghetti and Tomatoes are a family favorite around here--because of the tomatoes. I really should do a side website that is just tomato recipes.

Bring a pot of water with a pinch of salt to a boil, add spaghetti and cook until tender. Drain spaghetti and set aside. In a large frying pan, heat the lard until it is liquid, add onions and paprika. Saute until onions are soft on a low heat. Add tomatoes and spaghetti and simmer for 10-20 minutes. The longer you simmer, the more the flavors blend together as the spaghetti absorbs some of the tomato juice, but don't simmer too long (more than 30 minutes) as the spaghetti will become mushy and dry. You can also add italian spices, like basil and oregano to this recipe if you'd like to make it more like spaghetti with marinara sauce. If you're going to do this, I would also recommend that you puree the tomatoes.